Well LA is home to such a vibrant music scene that it’s hard to create one soundtrack that would compliment this city. There’s also more venues in this town than I could possibly name.

I’ve gotten the opportunity to see a few shows around town. My first show in LA was to see John Hiatt and the Combo at the Saban Theater…it was a perfect introduction to the LA music scene because my boyfriend, Nathan, plays bass in the band, and it felt like I was back home in Nashville watching him and the rest of the boys play on the stage in Beverly Hills.

My second show was to see Bon Jovi at the Staples Center. It was a dream come true to see such a legendary band up close. I caught part of “Livin’ on the Prayer” on video…

Although I haven’t gotten to see a show at McCabe’s Guitar Shop yet, I’ve visited this unique guitar shop in Santa Monica. There’s a great selection of music, instruments, and music books. 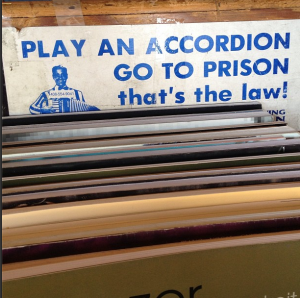 For more LA-inspired music, check out this playlist:

Listen while you read: