As a 19 year old student living in France, my cooking skills were virtually nonexistent…case and point, I once asked my roommate how to make pasta. She said, “Just boil water,” and when I had a pot of boiling water, I ran back to her and asked, “Now what?”

With the help of my roommate, my mother via e-mail/Skype, the Internet, and many prayers, I finally started getting the hang of cooking. One of the first French meals I learned to make were crêpes.

A group of us American girls (we call each other mes filles…literally means “my girls”) got together for dinner on February 2nd to celebrate la Chandeleur (a holiday to commemorate the purification of Mary and the presentation of Jesus). La Chandeleur is also known as Jour des Crêpes (“Day of Crêpes”), so we decided to teach ourselves how to make crêpes. 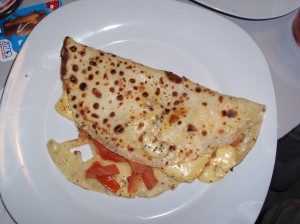 Once the batter is mixed, pour enough into a frying pan so that there is a thin, even layer of batter coating the pan. Closely watch the batter and as soon as it is solid, flip it to the other side (if the pan is buttered enough, you won’t even need a spatula!). Add in your favorite fillings and then fold the crêpe over the fillings.

Listen while you read: